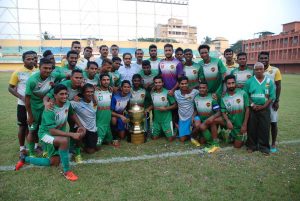 The goals were scored by Liston Colaco and Ronaldo Oliviera to end the season on a high.

Salgaocar Fc President Shivanand Salgaocar congratulated the boys for all their hard work and also wished them good luck in their future and hoped to see them play and succeed, while also also see some of the boys play for the diferrent national teams.

A minutes silence was observed for the departed soul of Tyson Silva, the Salgaocar FC Under-16 player who passed away under tragic circumstances.