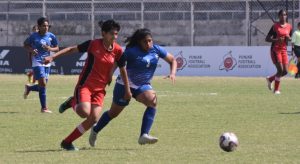 Alakhpura FC were the first team to earn three points in the third edition of the Indian Women’s League with a 1-0 win over Hans Women FC at the Guru Nanak Stadium in Ludhiana on Sunday, May 5.

India U-18 international Samiksha scored the only goal of the match as the team from Haryana assumed the top spot in Group I for now.

It was Hans Women FC, who got off the blocks early, in the first half, with Nigerian midfielder Uchenna Ukachukwu plotting their attacks.

However, Alakhpura FC soon began to grow in the match and started playing their swift passing game.

It took them a little over a quarter of an hour to open the scoring through Samiksha. The forward was played through inside the opposition area, as she rounded the Hans Women FC keeper Deepika Venkatesh and plonked the ball into the net.

That goal did give Hans some momentum, but Alakhpura FC’s high-pressing game did not give them much chance to get their attacks going.

Hans Women FC striker Anushka Samuel perhaps came closest to drawing the scores level in the second half, when she made her way into the box from the right and just had to put it past the keeper from a bit of an angle. But Alakhpura FC custodian Neelam got down and made a fine save to keep her side ahead.

Despite the incessant attacks of Alakhpura FC, which were orchestrated by India U-18 international Samiksha, Hans Women FC kept finding spaces on the counter. Anushka was in the thick of the action again as she twisted and turned a defender and played Jyoti Ann Burrett into space, but the latter scuffed her shot wide.

Previous Sportskeeda VIDEO: Brishti Bagchi & Her LaLiga Dream!
Next Franck Ribery to leave Bayern Munich at the end of the season!