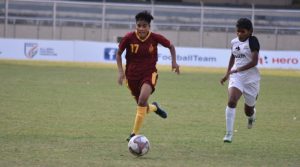 SSB Women Football team opened their account in the 2018-19 Indian Women’s League with a hard-fought 1-0 victory over eastern rivals Rising Students Club, as a fabulous long-ranger by Sangita Basfore made the difference between the two teams.

It was a frantic start to the game as SSB and Rising Students Club had a real go at each other in the opening exchanges.

SSB looked to make their India international Sangita Basfore the focal point of their attacks. Basfore, who generally plays midfield for the National Team did tend to drop back, but she was constantly urged by coach Barun Sengupta to push forward.

A little after the quarter-hour mark, SSB forward Dular Marandi had the biggest chance of the game yet, as she was played in behind the Rising Students Club defence, cut inside and took a shot on goal. But her shot was saved by Rising Students Club keeper Rani Bhowmick.

However, it was the former who got the goal just minutes before the halftime break. Basfore turned inside and unleashed a fierce shot from around 35 yards out that left Rising Students Club keeper Rani Bhowmick, who otherwise had an excellent game, with no chance.

The side from Bengal continued the pressure in the second half, but in a much more controlled manner. Basfore dropped deep into the midfield, the holding position that she is so familiar with in the National Team colours.

Bhowmick made save after save to keep Rising Students Club in the match as the game wore on. SSB had the chance to double the score towards the end, when Sumila Chanu broke free and unleashed a shot in a one-on-one position, but it was saved again by Bhowmick, who was given the Player of the Match award.