Home / Indian Football / General / Santosh Trophy: Kerala & Mizoram face each other for place in the finals!

Santosh Trophy: Kerala & Mizoram face each other for place in the finals!

Press Release 2018-03-29 General Comments Off on Santosh Trophy: Kerala & Mizoram face each other for place in the finals! 698 Views 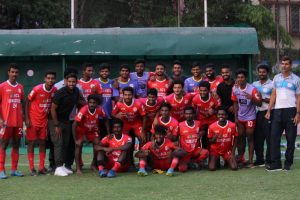 In what many fans believe is the real 72nd Santosh Trophy championship clash, Kerala and Mizoram will square off at the Mohun Bagan ground on Friday, March 30 for a spot in final.

Kerala have been dominant since the start of the competition. The former five-time champions started off with a victory over Chandigarh before beating Manipur, Maharashtra and hosts Bengal in subsequent matches.

The Satheevan Balan coached side is not only the highest scoring side in the competition but they also holds the best defensive record. Kerala have scored 15 goals enroute to the semifinal and in bargain just conceded once.

However, Mizoram are not a side to write off easily, and Kerala coach Satheevan Balan has warned his side against complacency or looking beyond Mizoram to a possible final against Bengal or Karnataka on Sunday.

“Mizoram is one of the best teams in the tournament. I believe it be an intense match with a lot of pressure. There are several things that we are working on and hopefully during the game it will work,” said Satheevan Balan.

Kerala last won the Santosh Trophy in 2005, and will fancy their chances of a first title in the current decade if they can overcome the NorthEasterners.

Mizoram, have shown improvement with each game. Altough they lost their last Group B against Karnataka, but they rested as many eight of their regular starters, in a bid to keep them fresh and all of them will be handed starts in the semifinal.

Mizoram coach Lalsangzuala Hmar has made it clear that he would be expecting a challenging encounter with Kerala, but he is unfazed by the pedigree of the Southern outfit.

“We have a lot of respect for Kerala but we are ready to face them. We need to keep our composure and I am positive that the players will rise to the occasion,” he said.

This will probably be a open game, with both coaches preferring free-flowing attacking football. Therefore, it promises to be a very absorbing game of football come tomorrow.