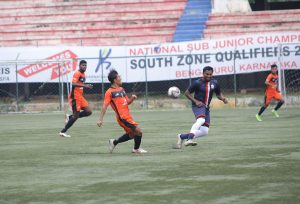 South United FC were rescued by Rungsing Muinao’s 89th minute winner against Income Tax just when it seemed like they were set for a scoreless draw. Despite creating plenty of chances all game, it took a scrappy goal in the dying seconds of the game to eke out a win for South United FC.

The game began with Income Tax registering a shot on goal, albeit a tame one. They spent most of the rest of the half trying not to concede though as South United FC created chance after chance. They were denied on most occasions by the imposing frame of the goalkeeper and his stellar reflexes on some occasions.

South United FC forward Jaison saw plenty of chances fall his way as he only needed to beat only the keeper on three separate occasions in the first half alone but was trumped by the Income Tax custodian Nicholas on all three occasions. Even the diminutive Sudipta had an opportunity as Aaron’s cross sailed over the goalkeeper and he met it with his head, but the effort just rolled across the goal line and was cleared.

The second half saw more of the same from South United FC, but as they chased they game, gaps started to appear at the back for Income Tax to try and exploit. They continued to test the keeper with Rungsing taking on more of an advanced role in the second period. At the other end though, every ball over the top threatened the South United FC backline.

Nikhil was called into action on more than one occasion as the game drew to a close but he kept his side in the game. The saves proved to be all-important as some direct play down the left led to Aaron taking three defenders out of the game with a pass and finding Kishan whose low cross was punched away by the goalkeeper but Rungsing was on hand to slot in the rebound.