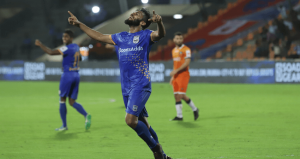 Indian Super League franchise Mumbai City FC has announced that defender Souvik Chakrabarti has left the club and completed his move to ISL debutants Hyderabad FC. The 28-year old full-back leaves the club after spending a season and a half with the Islanders.

In his time with the Islanders, Souvik turned out on 25 occasions for the club, making his debut in the 2018-19 season opener against Jamshedpur FC. Souvik also scored his first and only career ISL goal in spectacular fashion against FC Goa earlier this season.

Souvik Chakrabarti has completed his move from #TheIslanders to Hyderabad FC.

We wish you the best for the future, @souvik_23! ??#ApunKaTeam ?? pic.twitter.com/Jg1ykiXNxo