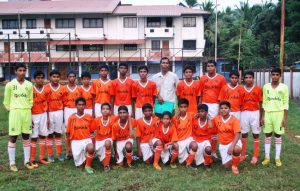 Sporting Clube de Goa Under-14 boys signed off their Goa U-14 League group stage matches in style as they thrashed Don Bosco Oratory 11-0 at the Batim Ground.

The first quarter saw a balanced affair with most of the ball being played around at the half way mark. It took Sporting Goa 14 minutes to open the scoreline. Joseph D’Souza opened the scoring with a good close range strike and later added one more in the 17th minute in similar fashion. Just when Don Bosco Oratory lads were trying to recover Mounish Totad added two more in the span of two minutes (22′, 24′) tilting the game in Sporting Goa’s favour. In the 33rd minute Joseph added one more making it 6-0 for Sporting Goa at the half way mark.

In the second half Joseph continued his explosive form by adding three more in the span of 10 minutes. In the 70th minute Sporting Goa won a penalty which was converted by Joaquim Pereira who went on to add one more with a good shot from the edge of the box making it 11-0 in favour of Sporting Goa before the final whistle.

With this win Sporting Clube de Goa have topped the GFA U-14 Group D to finish above their rivals Dempo SC on a better goal difference, both having collected 19 points from seven matches. 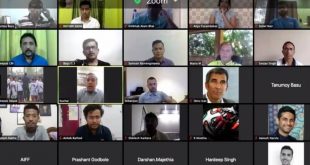