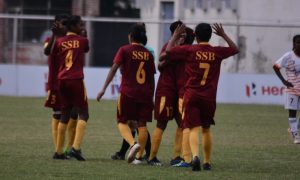 SSB Women Football Club took a step closer to qualifying for the semifinals of the 2018-19 Indian Women’s League, after beating Panjim Footballers 6-2 at the Guru Nanak Stadium in Ludhiana on Wednesday.

Much like their previous games, Panjim broke the deadlock early on against the run of play when Karishma finished a swift move to put them in the lead.

However, once SSB settled into the game, there was no looking back for the side from West Bengal. India international Sangita Basfore equalised for SSB, as they went on to dominate the game for the rest of the half.

The second half was a completely different story. SSB came out with intent, and opened the proverbial floodgates after a one-two sucker punch a little after 10 minutes of the restart. Sumila Chanu and Sangita Basfore struck in quick succession.

Sumila scored again, a few minutes later as she dribbled past two defenders inside the box and slotted it into the bottom corner. Ranjita Chanu added a fifth for SSB, when she nodded in a corner from close range.

With a little under 10 minutes to go, Ranjita scored again, this time from a melee inside the penalty area, before Karishma added a consolation goal for Panjim Footballers in the dying seconds of the game.