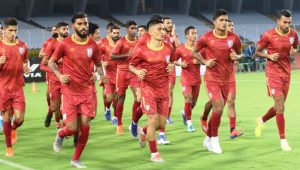 India head coach Igor Stimac announced his 26-member squad for the forthcoming joint 2022 FIFA World Cup and 2023 AFC Asian Cup joint qualifiers against Afghanistan and Oman which are scheduled to be played in Dushanbe (Tajikistan) and Muscat (Oman) on November 14 and 19 respectively.

Dheeraj Singh Moirangthem, whose performance under the woodwork during 2017 FIFA U-17 World Cup – India earned him huge praise from every corner, got his maiden call-up to Senior National Team set-up. Meanwhile, he’s the third player, after skipper Amarjit Singh and defender Anwar Ali, from the India U17 world cup squad to get summoned to the senior team camp.

“Dheeraj is a player for the future. We have always trusted our youngsters and they have also shown their prowess on the pitch. Our first choice goalkeepers are Gurpreet and Amrinder and we have seen Kamaljit and Vishal too. Now we would like to see Dheeraj closely as he belongs to those we should rely on in the future,” coach Igor Stimac explained.

Incidentally, two back-to-back away fixtures are always something which is “not going to be easy with the travelling involved”.

“It’s not going to be easy with the travelling involved. But, we are professionals and we know how to take care of our bodies. How we travel, what we eat, how much we sleep is going to be very important,” Chhetri sounded cautious ahead of the two pivotal matches in the FIFA World Cup qualifiers.

Pritam Kotal also reiterated, “You can’t complain about these because they’re an integral part of modern-day football. Proper rest, diet and recovery are of utmost importance which need to be taken care of.”

Coach Stimac mentioned it was “not an easy task” to shortlist the players “given the healthy competition” in the team.

“I trust them and they know their responsibilities. After watching the league matches since they started, we have shortlisted these players. Some players who are not on the list also performed highly and came very close to getting selected,” Stimac continued. “It’s not going to be an easy task to select only a few players, given the healthy competition we have in each position. This is a good headache for us.”