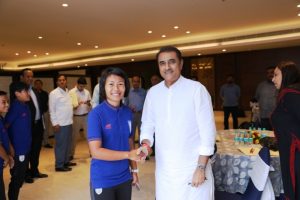 This is the sixth time Chhetri bagged the prestigious Award having earlier won it in 2007, 2011, 2013, 2014, and in 2017. Chhetri was voted the winner on basis of votes from all I-League, and Indian Super League club coaches.

“The fact that this was voted by the Hero I-League and Hero ISL Coaches makes it all the more special. I am grateful to my club members, coaches, fellow players, the National team staff, and the fans for their support, love, and affection,” Chhetri said, moments after declared the winner.

On being reminded about winning the Award for the 6th time, he added: “I never play for Awards. But yeah, it feels nice when your hard work gets recognized. This is an added motivation to do better.”

Apart from Chhetri, the others who have won the Award multiple times include IM Vijayan (thrice), and Baichung Bhutia, and Joe Paul Ancheri (twice each).

Meanwhile, Sahal Abdul Samad was declared the AIFF Men’s Emerging Footballer of the Year 2018-19. Sahal who was dubbed as the “next big thing in Indian Football” by Chhetri some days back, was also voted the winner by all Hero I-League, and Hero ISL club coaches.

The AIFF president met, and congratulated both of them. “Congratulations to you both,” he stated. “You deserve the Award. You have made us proud. I wish you best wishes for your future endeavours,” Mr. Patel added during his meeting with the Indian Senior Women’s National team in the Capital.

The 2018-19 AIFF Award for the Best Grassroots Development Programme went to the Jammu & Kashmir Football Association.

“I congratulate all the winners!” Mr. Patel said. “They serve as an inspiration for all budding aspirants, and their colleagues. We are extremely proud of all of them.”

Take a bow, @chetrisunil11 & Ashalata Devi 🤩🌟🙏@stimac_igor and @maymolrocky have a message for the ‘AIFF Player of the Year’ winners 🙌🏽💯#AIFFAwards 🏆 #IndianFootball ⚽ pic.twitter.com/2EeG6nwRiE

AIFF Men’s Footballer of the Year 2018-19
Sunil Chhetri (He was voted the winner by all I-League, and ISL Club coaches)

AIFF Men’s Emerging Footballer of the Year 2018-19
Abdul Sahal (from Kerala — He was voted the winner by all I-League, and ISL club coaches) 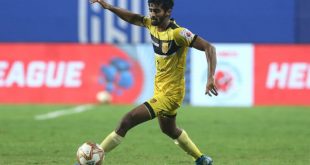