Sunil Chhetri: Not just Bengaluru FC, this match is about India!

Arunava Chaudhuri 2016-10-17 Asia, I-League Comments Off on Sunil Chhetri: Not just Bengaluru FC, this match is about India! 1,339 Views 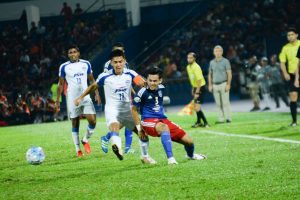 This is the third time an Indian Club will be trying to break the jinx of making it to the Final of the AFC Cup, Dempo SC and East Bengal Club having made it to the last four earlier. A couple of days prior to Bengaluru FC’s crucial second-leg semifinal against defending champions Johor Darul Ta’zim FC, the iconic Sunil Chhetri urges the Country to rally behind the Blues. In a freewheeling chat, Chhetri speaks about ‘this being about India,’ BFC’s success mantra, the opponents, whether it’s advantage BFC and much more.

You have been vocal on your SM handles asking fans for support. Why and how is this match different?

To put it simply, this game will decide if Indian Club Football can write a new chapter in history or not. We’re on the brink of something special and it’s going to take a determined 90 minutes to set foot where no Club from the Country has before. But more importantly this is not just about Bengaluru or Karnataka, this is about India. And that is exactly why me and my teammates have been so vocal about getting the Country to rally behind us.

In your playing Career so far (both for Country and Club) where would you rate this match in terms of significance?

At the Club level this game is up there simply because of what we could achieve should things go our way. No Club from India have been in a final before, and for us — in our three years and some months old existence — to be able to do that will be so special. I’ve won the major Trophies with different Clubs and I cherish every one of them. But to make the final of an Asian tournament will be up there.

People often curse Indian Clubs for lack of vision. But here we are looking at a Club some barely three years old and on the threshold of history. How do you define that?

It’s all about pulling out a blueprint of what you want to achieve and working single-mindedly to getting it done. In three years we’ve won the League twice, lost it with three minutes to the clock once and have won the Federation Cup. You can’t get that lucky, can you? Everyone at this Club — the Players, staff, owners, management and even the fans — are obsessed with wanting to be the change. And when everyone thinks alike, you can affect a change. That’s exactly what has been happening at BFC.

You have played Johor thrice this season and haven’t been able to get past them. What do you need to do this time?

On paper we don’t need to get past them to progress as even a 0-0 draw will do. But the Coach hates playing that way and so do the Players. In the 4 times we have played Johor, we’ve come really close on two occasions [2-1 after extra time and 1-0 in Bengaluru]. And then we managed to take a point away last month. The belief is there. They are a strong Team and are Champions with good reason but we always back ourselves and more so when we’re playing at Home.

Do you believe its advantage BFC after the 1-1 draw in the first leg?

It sure is an advantage but not a really big one. If JDT score a goal early on, we’re going to be chasing this game. What the away goal has done is given us the belief that we can go out there, take the fight to the Champions and come away with a reward. They are a quality side and will come all guns blazing. We need to stick to our plan and I think we will be alright.

Big match, Big Player – will the second leg be a Sunil Chhetri special?

Believe me when I tell you it won’t even matter if Amrinder Singh scores on the night if it means us going through to the final. But yes, I would like to play my part in the game. I relish big nights and stages and for us, till date, this would be the biggest game. If it turns out to be a Sunil Chhetri special, so be it.