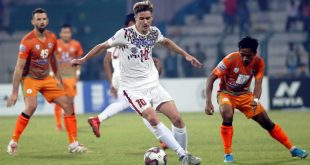 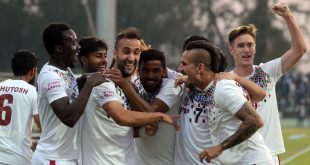 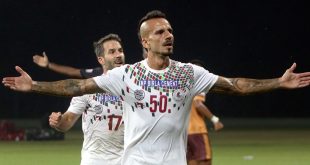 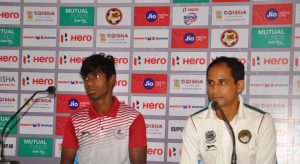 Churchill Brothers have left the euphoria of overcoming Delhi Dynamos in the Super Cup qualifiers behind and they’re looking forward to the Mohun Bagan test tomorrow in the Round of 16.

The Red Machines will lock their horns with the Mariners at the Kalinga Stadium in Bhubaneswar tomorrow, April 1.

“Yes, we got the sweeter result the other day but it’s a new test tomorrow. We have played Mohun Bagan twice this season but couldn’t garner a single point. We are aware of their football acumen and we respect them,” coach Alfred Fernandes stated.

Newly-recruited striker Willis Plaza scored a brace in the qualifiers to propel the Red Machines to the Round of 16 and he’ll be the ‘trump card’ for the Goan outfit tomorrow as well.

“Yes, you might term him as our trump card. We are in the hunt for the attacking spearhead and he fitted the bill perfectly. But, at the end of the day, it’ll be a team effort and we need to get the job done collectively,” coach exuded.

They finished second best twice against the Mariners in the I-League and now they’re here to better their records.

Skipper Osagie Monday didn’t mince his words expressing that they have special plans for their counterparts including Dipanda Dicka who wrapped the season with maximum goals in two consecutive I-League seasons.

“Yes, I know him (Dicka) very well. We played them twice and we all know how dangerous he can be in the box. We are very keen to prove our diligence tomorrow. Dicka is a great player but there are other players too who can be equally dangerous. We have plans not only for him but everyone.”

Mohun Bagan’s upsurge in the I-League started late which brought them very close to the title but finally, the saga didn’t end with the laurel. Shankarlal Chakraborty and his team has now shifted their focus to the Super Cup and the coach is now ready for the fresh challenge.

“It’s a tough match tomorrow. The tournament is different from I-League. A silly mistake can dent your journey heavily and it might end your path in the tournament as well. Churchill (Brothers) had a terrific game against Delhi Dynamos in the qualifier, far superior to their performance in the I-League and we have to be very cautious tomorrow.”

Although his team had left the pitch with two wins in the I-League against the Red Machines, the coach believes that they are a transformed side who might pose a stiff challenge tomorrow, “Whatever we did in the I-League, is past and we have already flipped the page. I-league is history and we have to focus on tomorrow’s game now. Churchill played an excellent game against Delhi Dynamos in the qualifier and we have to respect that.”

On being asked to single out a player who might give him a sleepless night, Chakraborty chipped in, “They brought in Plaza and he might wreak havoc on a given day. Foreigners akin to Plaza, Ceesay, Monday are well supported by the Indian players and it has been a dangerous team to play against.”

Raynier Fernandes, the young midfielder who combined well with Cameron Watson soaking in the pressure reiterated that they’re not looking into the past and focused on tomorrow only.

“Yes, we beat them twice but it starts from the scratch tomorrow. A mistake can cost us the match and we have to leave Bhubaneswar empty-handed. We are well aware of the fact and are focusing on nothing but tomorrow’s match.”

Meanwhile, Chakraborty mentioned that his team might tweak in their strategies and they won’t prefer to go for an all-out kill from the kick-off.

“We won’t go all out in attack from the kick-off, rather we’ll prefer to play a balanced football. We might change our strategies as the game proceeds.”

The second match of tomorrow’s doubleheader will kick-off at 8pm and it’ll be telecast on Star Sports 2/2 HD/1 Tamil and streamed live on Hotstar and Jio TV.