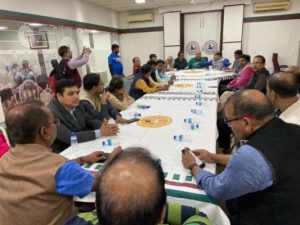 In the situation of Swapan Sadhan Bose being elevated to the post of President, the vacancy created were filled among the existing members of the current Executive Committee which are as follows:

Beside the above the executive committee decided to hold a condolence meeting on January 27, 2020 at club tent in memory of their former President, the late Gitanath Ganguly.

Further the executive committee decided to celebrate the 90th birthday of Ex-Olympian and decorated football player of Mohun Bagan, Samar ‘Badru’ Banerjee. The details of the program will be shared later.

As XtraTime reports from Kolkata, Mohun Bagan youngster Subha Ghosh in under lockdown like the …