Home / International Football / Asia / Team India midfielder Eugeneson Lyngdoh: We have learnt from our past mistakes!

Team India midfielder Eugeneson Lyngdoh: We have learnt from our past mistakes!

Press Release 2017-10-10 Asia, Team India Comments Off on Team India midfielder Eugeneson Lyngdoh: We have learnt from our past mistakes! 831 Views 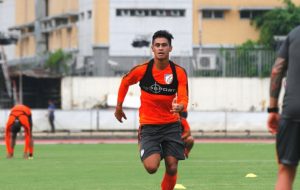 Midfield General Eugeneson Lyngdoh nicknamed the ‘Indian Mozart’ by the fans said the Indian National Team is “prepared and looking forward to the crucial clash against Macau” in the 2019 AFC Asian Cup Qualifiers UAE scheduled to be held at the Sree Kanteerava Stadium on Wednesday (October 11, 2017).

“We are on nine points from three matches having won all of them. The results have made us confident but we are not overconfident at all,” he stated. “We are prepared both mentally and physically.” The last time the two teams had met in Macau last month, India rode on a Balwant Singh brace to win 2-0.

The National team landed in Bengaluru on Monday (October 9, 2017) after camping in Mumbai for over 10 days.

Eugeneson, however, was quick to dismiss that India will have it easy against Macau. “In Football, or for that matter in sport, nothing is guaranteed. Fortunes change fast and we need to be prepared for that. We are approaching the match in a cautious manner,” he maintained. “Three points is what we are looking forward to. But I reiterate, we are not the favourites.”

“The camp has been lively a lively one and all are eager and raring to go. It’s an opportunity which we can’t slip off our hands.”

Eugeneson attributed the team success to its ability to “learn from its past mistakes.”

“We didn’t get off the best of start in the World Cup qualifiers. We were a new Team and took time to settle down. But we are on a winning streak at the moment; and therein lies the danger. If you take your foot off the pedal, you may lose the streak,” he warned.

He also mentioned about his connect with Bengaluru and Bengaluru FC and its fans. “It was such a different feeling when I landed in Bengaluru this time. Every other time, when I finished my National Team assignment I went back to my home in the City but this time I will be heading off to Kolkata,” he smiled.

“We are professionals and need to carry on with our job. But there’s no denying that I have lovely memories of playing in this City.”

“The fans in Bengaluru are our strength. They have never let the National team down. The rush of adrenalin every time they cheer helps us immensely. Fill it up against Macau,” he urged.