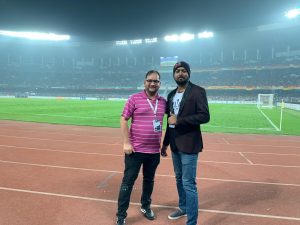 Sunday, January 19 witnessed the first Kolkata derby of the decade and what a match it turned out to be.

In the end, I-League leaders Mohun Bagan emerged victories with a 2-1 win over struggling archrivals East Bengal at the Saltlake Stadium.

And for me personally it was a great honour to be the TV expert of the day for DSport alongside Suman Chakraborty in the commentary box infront of a full house.

The story of the match isn’t so easily told as it had numerous twists and turns like the plot of a good thriller.

After an even start, Mohun Bagan took the lead through a placed Joseba Beitia header of a strong Nongdomba Naorem and they could have scored more but only took a 1-0 lead into the break.

The second half started in similar fashion with Mohun Bagan the better team and it was a Beitia corner which was headed in by striker Papa Diawara for a 2-0 lead.

East Bengal brought on new loan signing Edmund Lalrindika, he brought new life into his teams attack and it was him who set up Marcos de la Espada with a lovely through ball for the red and gold to reduce the deficit. But a few minutes later Edmund had to come off again after a clash of legs with Fran Gonzalez with another youngster in Abhijit Sarkar coming on.

East Bengal kept up the pressure until the end, had numerous chances but they couldn’t get a deserving equaliser as the Mariners won the match 2-1 to stay top of the I-League table.

While Mohun Bagan celebrated the win, it was all gloom at the red and gold camp with their third league loss in a row and to make matters worse, head coach Alejandro Menendez Garcia put up a very arrogant show at the press conference not fitting after such a derby loss.

Quess Corp and East Bengal set a meeting for Tuesday, January 21 to discuss the way forward for the remainder of the 2019/20 I-League season, but before that Alejandro handed in his resignation for what he said were personal reasons, leaving the club post the derby loss also without a head coach.

While Mohun Bagan focus on continuing their positive league run at the top of the table, East Bengal under a new coach will want to reset their season and start afresh.

A Kolkata derby never disappoints with so many things happening.