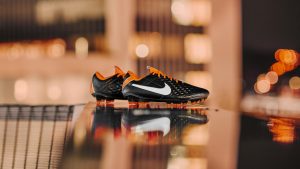 Originally released in 2011, the Nike Tiempo Legend IV Elite was the lightest Tiempo of its time — by at least 20 grams. Even more enticing than its lightweight feel was its ability to stand out on the pitch: the cleat’s vibrant orange pop of color from the tongue, heel graphic, stud tips and laces created a stark contrast from the black premium leather upper (a signature of the Tiempo franchise). Nike Flywire technology was integrated into the leather for a midfoot lockdown and, overall, more dynamic fit, while enhanced vamp stitching was strategically placed for lateral agility.

With tribute to its predecessor, the latest Nike Tiempo Legend 8 gets OG Tiempo Legend IV Elite color treatment. Its fit and feel is defined by the Legend 8’s stitchless, quilted diamond pattern upper and Flyknit Fit Tunnel, providing a supportive and snug fit around the midfoot. Additionally, the boot has Quadfit mesh in the forefoot to prevent overstretch of the outer leather layer.