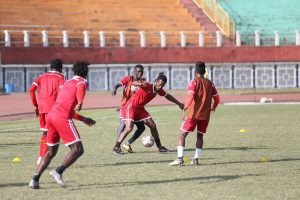 The I-League starts the weekend in Imphal as the resurgent TRAU FC host Aizawl FC in a home fixture on Saturday, January 25. The match will be broadcast LIVE on DSPORT and can be streamed online on FanCode from 2pm IST.

TRAU are placed third on the points table with 11 points from eight matches and have been on a winning spree since their historic victory in the Imphal derby which set their run in motion. Since then, they have defeated the Indian Arrows 2-0 and Churchill Brothers 2-1 respectively, all of which came since the arrival of head coach Dimitris Dimitriou.

Speaking before the match, the TRAU FC gaffer Dimitriou, said, “We are delighted that we have three wins in a row against very good opponents and we are unbeaten in the last five games. The results are coming because of the hard and disciplined work of the players. My boys have started believing in themselves again and in their teammates.”

He also commented upon the opponents, saying, “Our next opponent Aizawl is a club with four or five times bigger budget than my team. They have good players and a solid team. They have also made a few additions during this transfer window and being former champions, they are a well-organized club. It is going to be a hard game against them but I hope my players will overcome all the difficulties and we will get the three valuable points and stay in the top half of the league.”

Aizawl FC will be entering into the match after a gap of two weeks. The same seems to have given a much-needed breather to the team to rethink their strategy. The former champions lie ninth in the table at the moment with eight points from seven games, out which they have only lost a solitary match and drawn five games. A win in this match will ensure Aizawl FC’s first win after a continuous streak of four draws.

Aizawl FC head coach Stanley Rozario looked at the positive side of the break and said, “We got a two-week break and we have built up our team in all the games related to aspects like transition in attacking and defending, converting goal-scoring chances and more focused on avoiding silly mistakes.”

“We have also played a friendly match with the Mizoram state team and won it. Now my team is ready and my players are confident and looking forward to taking on TRAU FC. We will try hard to get three points.”

Rozario also praised TRAU FC saying, “TRAU FC started the league very poorly by losing three matches and they were at the bottom of the table but now it is totally a different and transformed team under coach Dimitriou. It is amazing as the team is settled and looks more organised.”