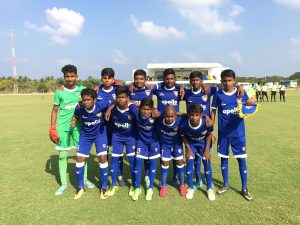 The Chennaiyin FC Under-13 team defeated Chennai City FC 9-1 in an Under-13 Youth League match at the SSN College Ground here on Sunday. The Chennaiyin FC boys registered a sixth consecutive league victory this season courtesy four goals from Mohamed Liyaakath, a hattrick from Rahul K. and two goals from E. Guhan.

The Chennaiyin FC U-13s were in action after over a month, with their previous outing being a 6-0 win over Mahogany FC on December 30, 2017. And they picked up from where they left off as Liyaakath opened the scoring in the third minute with a well-taken goal. Rahul K. soon made it 2-0 before Liyaakath added another to give Chennaiyin FC a 3-0 lead at half-time.

It was total domination by Chennaiyin FC as Liyaakath completed his hattrick in the second-half, making it 4-0 in the process. Defender E. Guhan got into the act with a quickfire double, the first of which found the back of the net with the help of a deflection.

The closing stages too had no shortage of goals as Liyaakath scored his fourth, which was sandwiched between two more from Rahul K., who also completed his hattrick in the process. Chennai City FC scored a consolation goal scored by Akshay Kannan.

The Chennaiyin FC U-13s will look to continue their fine form and winning run when they take on Mahogany FC at the SSN College Ground on Wednesday, February 14 at 3:30pm.