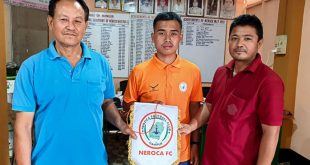 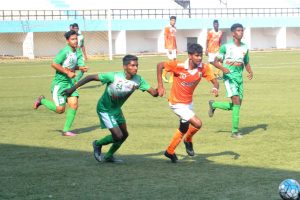 Sporting Clube de Goa U-18s went down to Salgaocar FC U-18s in a decisive U-18 I-League fixture on Saturday with Liston Colaco (8′ pen, 81′) scoring a brace while Devendra Murgaokar (78′) added one ensuring the Vasco-based side full three points.

Both teams started off with some dazzling football at either end trying to establish their authority early in the match. The Greens got an advantage when Sporting Goa skipper Shawn Noronha was penalised for a controversial handball. Liston Colaco who stepped up sent the Oranje custodian Akshat Hadkonkar the wrong way giving an important lead to Salgaocar.

In the 28th minute, Liston made a dazzling run in the midfield to set up a charging Devendra Murgaokar who made a mess of the golden opportunity. Sporting Goa stepped up the gas in the 30th minute when Alston Camotio took on two defenders to fire a shot which went inches above the post. Sporting Goa had their best opportunity in the 36th minute when a Veegan Ferrao goal-bound header saw Salgaocar’s Selwyn Miranda pull out a goal line clearance, Oranje skipper Shawn headed the rebound out from a handshaking distance. Towards the closing stages of first half Princeton took things in his own hand firing a rocket from about 35 yards away, but the Salgaocar FC keeper managed to get just enough to keep it away. The score stayed 1–0 in favour of Salgaocar at half-time.

Crossing over it was Sporting Goa who got their opportunity to equalise when Kingslee Fernandes set up Alston with a brilliant cross however the latter’s powerful left-footer was well saved by Nora Fernandes. In the 78th minute, a brilliant through ball from Liston saw Devendra beat the offside trap to put it past Akshat making it 2–0 for Salgaocar FC. Liston wrapped up things in style when he displayed some brilliant ball control to dribble past Sporting Goa defence to make it 3–0 for the Vasco-based side.

With this defeat Sporting Clube de Goa stay on 3 points while Salgaocar has pocketed 7 points so far in the U-18 I-League – Goa leg.