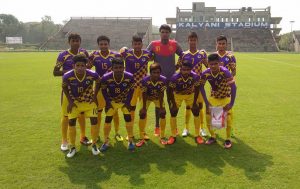 United SC won a thrilling encounter 5-3 against Salgaocar FC in the U-18 I-League at the Kalyani Stadium on Sunday to stay top of the group.

United SC started off their second match in U-18 I-League against Salgaocar FC with a positive mindset. After winning their first match 9-0 against the Bhaichung Bhutia Football School, the Purple brigade were confident going into the match at the Kalyani Stadium, while Salgaocar also had won 3-2 against Royal Wahingdoh FC in their opener in a close encounter.

Sandip Bhattacharya of United SC was inches wide with a long-range shot and moments later Salgaocar went equally close at the other end.

United SC’s Basudeb Mandi dominated the midfield and in the 12th minute it was Sandip Bhattacharjee, who put a smile on all United SC faces when he found the back of the net with a fierce low shot.

United SC went 2-0 up in the 18th minute, when they got a free kick 30 yards from the opponent goal and Gaurab Das made no mistake to score of the free kick.

The second half started as the first one had ended with United SC in control. A rapid raid downfield in the early minutes of the second period involving Basudeb Mandi, and Sandip helped United SC increase the lead from a fantastic goal of Basudeb Mandi on 59 minutes.

In the 68th minute Rana Pandey of United SC made no mistake to give his side a 4-1 lead when Sujay dribbled through the Salgaocar defensive and delivered a low cross from the right flank. After conceding the fourth goal Salgaocar made few good moves and as a result got two back to back goals on 70th and 73rd minutes which kept them alive in the match.

Salgaocar got few easy chances to equalise, but their momentum was cut short when United SC in the 85th minute sealed the match with their fifth goal when Sandip gave an addressed cross to Supratik from right side and Supratik comfortably put the ball in opponent goal.

With this hard fought 5-3 win, United SC remained top of their group with the Purple Brigade set to play their last match on May 2 against Royal Wahingdoh FC at the Kalyani Stadium at 3.30pm.