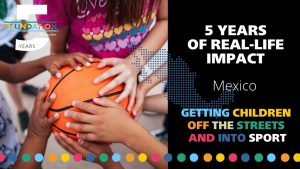 Physical education is playing a frontline role in giving children enrolled at 88 Mexican schools a healthy alternative to gangs and drugs.

The UEFA Foundation for Children has been working to improve the lives of children in Mexico by helping to provide better access to education and sports activities.

Opponent
For a large number of children aged between 5 and 14 living in the Mexican state of Chihuahua, education is the best hope of escaping a life of poverty and malnutrition.

According to statistics from CONEVAL, Mexico’s national social development board, half of children and teenagers in the region have not engaged in any physical activity in the past 12 months. A third of the state’s population are illiterate and do not complete their elementary or secondary schooling.

Since the start of 2020 the UEFA Foundation for Children, which celebrated its fifth anniversary last month, has worked closely with the Fundación del Empresariado Chihuahuense (FECHAC) to ensure local youngsters have better access to basic education and after-school sports activities.

The FECHAC programme is currently running at 88 schools across Chihuahua, with plans to increase that number to more than 100 over the next two years.

FECHAC and the Foundation hope that a combination of school and sport will foster healthier lifestyles among local children, increasing their self-confidence and developing a different outlook on life.

Teaching sport brings physical and social rewards, improving fitness and encouraging teamwork and perseverance. By putting the emphasis on discipline and rules, the programme shows children there is a healthy alternative to engaging with gangs and using drugs.

“Sport and education are vital for the physical and intellectual development of any child,” said former Mexico captain Torrado.

“This is a great initiative by the UEFA Foundation for Children in conjunction with the Fundación del Empresariado Chihuahuense. It’s giving children the chance to develop new skills that will hopefully enable them to choose their own paths in life.”