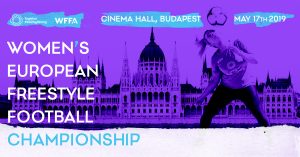 #WePlayStrong, UEFA’s women’s football campaign, has entered into a unique partnership with the World Freestyle Football Association (WFFA) to help celebrate its first-ever Women’s European Freestyle Championships – which takes place on the eve of the UEFA Women’s Champions League final between FC Barcelona and Olympique Lyonnais in Budapest on Saturday, May 18.

Liv Cooke, former world freestyle champion and #WePlayStrong Ambassador, will be the head judge for the inaugural competition, which takes place in the iconic Cinema Hall in Budapest featuring some of the continent’s most talented female freestylers.