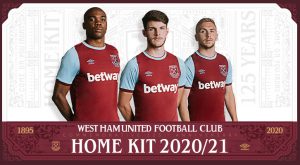 West Ham United FC have confirmed a new long-term extension with UMBRO which will see the global sportswear company remain as the Club’s Official Technical Partner.

UMBRO will continue to produce all official West Ham playing kits, for both the men’s and women’s first teams and all Academy age-groups, as well as training products and leisurewear for players and supporters.

West Ham United has had a long-standing relationship with UMBRO, having produced the Club’s first ever replica kit for supporters to purchase during the 1960s and, more recently, for the past five years, the two parties have enjoyed a successful relationship with many highlights, including the memorable Farewell Boleyn jersey in 2016 and the first kit worn upon their move to London Stadium that same year.

This year, as West Ham United celebrate our 125th anniversary, UMBRO will again provide the Club with bespoke kits that pay homage to its history, with the new strips being designed based on fan feedback about what they wanted to see.

West Ham United Chief Commercial Officer Karim Virani said, “The enhanced agreement represents the Club’s continued commercial strength off the pitch, which ultimately is for the benefit of things on the pitch. The new agreement places it amongst the biggest in football in this country.”

“With UMBRO working closely to our supporters’ views on what they wanted to see from the kit in our 125th anniversary year, we feel that this partnership is really delivering for fans.”

With a centenary year also on the horizon for UMBRO, and reflecting on another stand out moment on the timeline of the strong relationship between UMBRO and the Club, Sam Lucas, Head of Sports Sponsorship at UMBRO UK, said, “This further extension is really exciting news for UMBRO and we’re proud to extend our agreement with the club. Our partnership continues to be built on the synergies between our UMBRO brand and West Ham United as such an iconic football club. Our collaborative nature has allowed for a successful relationship over the past five seasons, and we look forward to that continuing.”

“We’re thrilled to be a part of such a big milestone for the club as they celebrate their 125th anniversary and it’s been exciting to design and produce the kits that commemorate that milestone, creating more lasting memories for the fans.”