Winner takes all on Tuesday for Chhinga Veng FC and Electric Veng FC! 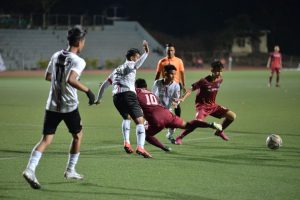 Former champions Chhinga Veng FC and Electric Veng FC will have everything to play for in the second leg of their semi-final clash after a goalless draw in the first.

The neighbouring clubs from the east side of Aizawl played out an even battle at Rajiv Gandhi Stadium in Mualpui on a chilly Wednesday evening as both sides served up a different kind of football to the one they usually showed in the league rounds.

Known for the fast paced counterattacks and possession play, both teams set out this time to come out on top of a cagey tactical battle. The result being the teams cancelling each other out in match ups around the pitch.

Chhinga Veng FC enjoyed the best chance of the half when Thasiama struck the post in the first half as Lalruatfela and Ramhlunchhunga struggled to get to the end of deliveries after being put through on a couple of occasions.

Electric Veng improved after the break with Ramhlunchhunga being denied by Chhinga Veng FC custodian Dharminder Guru who also produced a save late on against Jacob Lalrawngbawla.

The teams survived a late end to end action and will now find themselves on level playing fields in the second leg on Tuesday evening at Rajiv Gandhi Stadium.