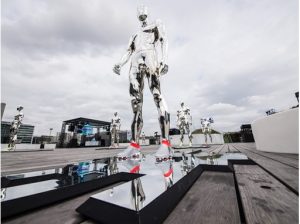 adidas Football on Monday, June 13 night celebrated the Mercury Pack at an exclusive event in the heart of the French capital Paris.

Mercury Pack, which includes the X 16+ PURECHAOS and ACE 16+ PURECONTROL, will be worn on pitch throughout UEFA EURO 2016 by the likes of Paul Pogba, Thomas Müller and Dele Alli. The third Mercury Pack silo, Messi 16+ PUREAGILITY, will be worn by the world’s best player, Leo Messi, during this summer’s Copa America tournament. The boots were seen on-pitch for the first time at the UEFA Champions League final in May 2016.

The event, hosted on the rooftop of the trendy Cité de la Mode, was attended by hundreds of Parisian influencers and trendsetters from all over the world. Those Football fans were treated to an exclusive DJ set by Agoria and a screening of the Belgium vs Italy match, whilst the location was decorated with “mercury” statues, designed to embody the fluidity of the pack.

Ajax Amsterdam has signed a multi-year agreement with Unibet, a provider of online sports betting. …