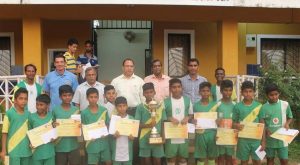 Chief Guest for the finals was Goa MLA Glen Ticlo, as a footballer himself, who expressed his happiness that football was being developed so well through the GFDC all over Goa.

GFDC Chairman Dr. Rufino Monteiro, explained the importance of competitions in the development of football talent and hoped this football league will grow bigger and better in the years to come.

Petros Sideris, technical director of the Boca Juniors Football School in India praised the Goan boys for their wonderful talent and said that he and his boys were happy to be in Goa for the tournament whilst emphasising the need to build up this joint Boca Juniors – GFDC tournament.

GFDC Technical Officer-in-charge Derryl D’Souza proposed the vote of thanks.