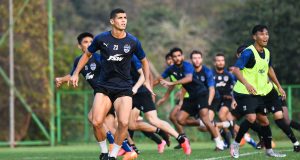 Carles Cuadrat said there would be absolutely no room for complacency when his Bengaluru FC side take on a winless and tenth-placed Odisha FC at the GMC Stadium in Bambolim on Thursday. In Stuart Baxter’s side, Bengaluru FC will be up against one of the three teams that are yet to register a win this season, and Caudrat reckons that Odisha FC’s bid to turn a corner soon will only make them more dangerous.

“I know my players well, there is no complacency. There is no room for that. We are very competitive and so are Odisha FC. They will try for all three points, I am sure. This is football. We have seen games where teams that were not getting results, suddenly it all happens for them. At this point, Odisha is dangerous. They have been fighting for three points but it hasn’t been happening. One of these days they will win a game for sure. They have quality players and a very good coach. We are ready for the game, but not overconfident. We will not be complacent against any team in the ISL because we know this competition well and any team can beat any team, on any given day,” said Cuadrat, addressing the media on the eve of the match.

After a bit of a stutter to start their campaign with, Bengaluru FC have picked up the pace with both points and the way they have gone about their football. The Blues are fresh off a 4-2 win over Kerala Blasters and will be buoyed by the fact their goals came from four different names, highlighting the kind of quality they possess in the attack.

While Odisha FC are yet to register their first win, they have shown enough pluck in some games where they deserved to come away with more. The team came back from two goals down against Jamshedpur FC to score twice in the last fifteen minutes and share points. They were then unlucky to go down 0-1 to ATK Mohun Bagan in what was the last minute of the game, after having the champions on the backfoot throughout.

Cuadrat believes Odisha FC possesses players to push hard for a win. “They have powerful, experienced central defenders who give them a lot of strength at the back. I especially like Cole Alexander; he gives a lot to the team. He is one of those quiet players who has been doing a lot on the pitch. I have been studying the opposition like I always do, and we will do our best to manage the game.”

In team news, Cuadrat said that the Blues will continue to be without defender Rahul Bheke, but more as a precautionary measure. “Rahul didn’t participate in the game against Kerala with a bit of a muscle issue, but for Thursday, we are simply protecting him.”

The game kicks off at 7.30pm and will be telecast on the STAR Sports network, HotStar and JIO TV.