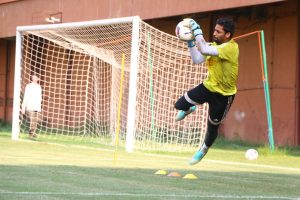 Indian Super League franchise FC Goa has confirmed the signing of trio Romeo Fernandes, Mandar Rao Desai and Laxmikant Kattimani. The trio have risen sharply through the ranks in the past two ISL seasons and are seen as vital components of the team. All three players featured heavily last season with Kattimani being Zico’s preferred choice as his custodian between the sticks.

The Vasco lad said, “I’m very pleased that Zico has trusted me with the responsibilities in between the sticks again. The setup last year was great and that was one of the prime reasons for me re-signing with the club. And one doesn’t get to experience the atmosphere of Fatorda anywhere else in the country so that was a definite plus. We nearly won the ISL last year in front of our home crowd but fell just short. I’m sure this year we will mount a similar challenge. We want to give Goa the trophy that the fans of football here so richly deserve.”

Mandar was also a key figure with the club and chipped in with two assists to go along with his three goals and made 14 appearances in a campaign that nearly culminated in the club winning the title. He has since gone on to start in Dempo’s successful push to return to the I-League and has recently returned from a trip to Spain where he worked with Spanish La Liga side, FC Villarreal. 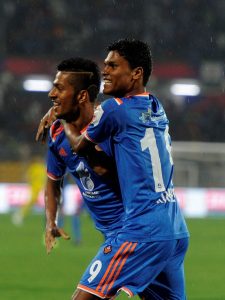 Speaking of his re-signing, Mandar said, “I’m delighted to re-sign with the club. Being a Goan and to be able to play in front of my home crowd is a thrill that I can’t easily explain. I feel like I’ve been improving my skills with each passing game and can’t wait to get into the season. The training camp in Spain with Villarreal was a huge boost for me and certainly learnt a lot there under Carlos Perez, who coached me there. I believe, with Zico back and with a good pre-season ahead of us, the team will look to go all the way this time.”

Romeo, who shot to fame in the first season of the ISL was also a constant menace on the right wing throughout the season. His ability to accelerate was particularly felt by Delhi Dynamos, against whom he scored two goals in the matter of minutes having just come on in the final match of the group stages. He was also responsible for laying on the assist that got FC Goa on level terms in the final at Fatorda.

The Assolna native said, “I’m happy to be back at FC Goa again. We’ve had two brilliant campaigns in the past two editions and we certainly want to repeat that performance if not better it. We had great team chemistry last year and we were very focused on our objectives. We want to work up that same intensity during pre-season and we want to be in prime shape when the campaign gets underway.”

Speaking at the re-signing of the trio, a FC Goa spokesperson said, “We are delighted that the three have re-signed with us. They have been a part of this club and its journey since the very beginning and have grown with us. They have becomea part of the identity of this club and we are glad that they will continue to be a part of that this season. It’s great that we continue to have that distinct Goan flavour within the team.”