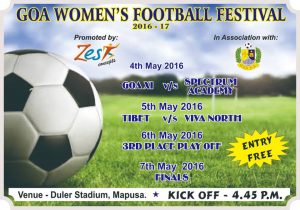 The Goa Football Association has set the wheels of women’s football in motion with the launch of the Goa Women’s Football Festival that kicks of tomorrow at the Duler Stadium in Mapusa. The festival is being promoted by Zest Concepts and supported by Viva North.

The Goa Football Association has been tirelessly working to revive women’s football in the State and the efforts have come to bear fruits with a solid women’s under – 19 team. Says Juliana Gurjao Colaco, chairperson of the women’s sub-committee at the Goa Football Association, “it’s time we take women’s football to a competitive level, so that our talented players are offered the necessary exposure. It is therefore that we are organizing the Goa Women’s Football Festival, from tomorrow that will feature  four teams.”

Juliana further added that the festival which will become an annual affair will act as a curtain raiser to the first women’s football league of the State that is in the pipeline.

Goa Football Association President Elvis Gomes said that it was their endeavour to promote women’s football in the state and accord it the respect it deserves. “We hosted the U-18 National Football Championship for girls last year and that set the ball rolling. We have brainstormed on the best way to revive Women’s Soccer, and we are making a small start with the Women’s Football Festival. This tournament will see all the major girls teams in the country participating in the future editions. We will also be hosting the FIFA Refresher Coaching Courses for Women in July and August. We will have the Senior Women’s State Football League that will follow later.”

Mr Gomes and Mrs. Gurjao Colaco both appealed to the football loving fans to support this festival by turning out in large numbers to cheer our young women footballers.

“We are delighted to be associated with the Goa Football Association on the inaugural women’s football festival, one we believe will certainly help increase the popularity of the women’s game in Goa,” exclaimed Rahul C. Rodrigues, Co-founder and MD, Zest Concepts.

Team TIBET
Team Tibet composes of players from the Tibetan refugee community throughout India and Nepal. The ‘Select’ Team made up of it’s best players which essentially comprises Tibet’s first women’s national team. The team has been training for the tournament for the last two weeks.

Jamyang Choetso (Wangla), newly named captain of the team, started playing football with boys from the young age of 7 and has since become a highly rated player in central midfield. She is set to start nursing college this year, and wants to complete a FIFA coaching course soon after.

Tenzin Dekyong, Team Tibet’s goalkeeper, was born in a small Tibetan refugee settlement in Karnataka and is set to become Tibet’s first female sports teacher after she enrolls in the Lakshmibai National College of Physical Education, Gwalior. For the first time, the team has selected a contingent of six players who come from villages in the high Nepali Himalayas, near the Tibet border. The team is coached by Mr. Gompo Dorjee, ex member of the Tibetan men’s national team, and managed by Cassie Childers, hailing from the USA.

Chinky in the midfield; and Arashdeep in the strike force of the squad. The team is coached by Mahavir Sharma, who did national duty for Gujarat and Rajasthan as a player in the Santosh trophy, is a recognized AIFF referee and now a D licensed coach.

Joselyn D’Souza, from Candolim, also represented India in the under-16 age group, and can keep the goal and also play on the right flank. Rekha Bale also from Candolim represented India in the defence in u-16 age group. Ashwita Gadekar from Anjuna is another quality player to look out for in the defence having represented Goa in the under-16 age group. Coach Fausto Lobo, of Sports Authority of Goa, who is training Viva North, said that he had to put the team together at short notice and with little time for training, he is happy at the way the squad is combining. He is confident that the team would do well.

Goa XI
The Goa XI team has as many as six international players apart. Veleina Fernandes from Ponda, Nevilla Colaco from Aquem and Anline Fernandes in the midfield,   while Ciannia Lobo from Calangute and and Scindia V Saundacikar from Siolim will hold the defence. Sushmita Jadhav will lead the attack. The team also comprises of quality State players like Cynthia Lobo from Pernem, making the team the favourites to win Goa’s first women football festival. Coach Juliet says that her team is looking good though they had very little time to practice. “ I am happy with the combination and am confident of my girls, “ she disclosed.