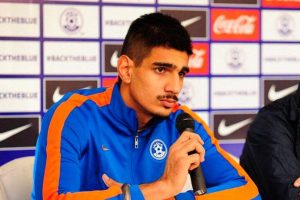 Indian international Gurpreet Singh Sandhu made his league debut for Stabæk Fotball in a Norwegian Tippeligaen match against IK Start on Sunday, May 29 and he created history by becoming the first professional footballer born in India to play in a Top Tier league match in Europe.

Stabæk Fotball is currently placed 15th in the Norwegian Tippeligaen as the club try to avoid relegation following a weak start to their 2016 league campaign.

When I congratulated Gurpreet on his achievement, he told me, “It shows that I’m going the right way doing the right thing instead of quitting which I could have over the two years I have spent here waiting for this chance. Shows that the work pays off!”

A lot of people have doubted Gurpreet for going to Norway and spending time on the first-team bench, playing for the second team and training. But it has helped him develop overall, not only as a footballer but also a human being as he has become much more mature having left India as a young man.

Playing for Stabæk in the Norwegian league is a another milestone for Gurpreet, who now joins the Indian national team in their 2019 AFC Asian Cup playoff qualifiers against Laos on June 2 and June 7. And Gurpreet is set to play as India’s No. 1!

A big Congratulations from me once more!