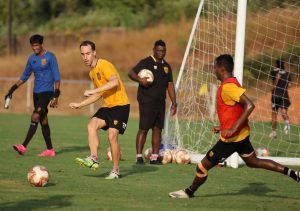 Hyderabad FC will be keen to grab their second win of the campaign when they host SC East Bengal in a Round 5 encounter at the Tilak Maidan in Vasco on Tuesday. Four games into the Indian Super League season, Hyderabad FC are one of just three teams that are yet to lose a game this campaign and will be eager to convert their efforts into a victory, against the ISL debutants.

The visitors, SC East Bengal, have not had the best of starts to the season. They are yet to score a goal, but registered their first point in the league table in a feisty encounter against Jamshedpur FC last Thursday. They remain bottom of the table but could prove to be one of the biggest tests for Hyderabad FC so far this season.

“With every game, East Bengal are getting better. Their fixtures so far have not been easy. Suspensions and late goals conceded have been the issues for them, but they have been playing some really good football,” said Hyderabad head coach Manolo Marquez on the eve of the clash.

“The draw they secured against a physical Jamshedpur side despite playing with ten men for over 70 minutes, is proof of their quality and I expect this game to be a tough test for our side,” he added.

Robbie Fowler, who is also in his first season in India, has not had the ideal pre-season with his squad given their delayed entry into the ISL. But almost a month into the campaign, his side are getting used to the methods and are slowly gaining form.

The likes of Matti Steinmann, Jacques Maghoma and Anthony Pilkington have formed a good understanding in the midfield and in attack, while the likes of Sehnaj Singh and Scott Neville can provide cover at the back.

The absence of Eugeneson Lyngdoh, who serves a suspension for the red card he picked up in the last round, could affect Fowler’s plans for this game. However, the Englishman has enough quality in his side to come up with a solution.

Hyderabad FC, on the other hand, though unbeaten, have picked up just three points from the last three games. But the consistency of youngsters like Chinglensana Singh, Liston Colaco, Akash Mishra and Hitesh Sharma has been a real asset for the side this season, despite suffering multiple injury setbacks in the opening rounds.

“They (the missing players) are important players for us but this is the reason why the squad has more than eleven players. This gives a great chance for the youngsters in the squad who are showing their quality and proving that they are ready for these games,” the Head Coach added.

While East Bengal have conceded the most goals in the ISL along with Odisha FC, Hyderabad FC have conceded the least, alongside league leaders Mumbai City FC. But the stats will not matter when the two, equally matched teams, take on each other at Vasco.

“All the games in this league are pretty difficult. Our focus is now on the game on Tuesday. We try to prepare well for it and hope to win and so will SC East Bengal. We know this could be one of the toughest tests for us so far this season,” Manolo added, reiterating the importance of this fixture.

The game kicks off at 7:30pm IST on Tuesday and will be telecasted live on the Star Sports Network with live streaming on Disney+ Hotstar and JioTV.