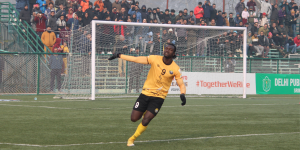 Real Kashmir FC continued their unbeaten run in the league winning 2-1 against Sreenidi Deccan FC in the sixth-round tie of the I-League 2022-23 at the TRC Stadium in Srinagar on Tuesday, November 6.

After trailing until the hour mark through Asheer Akhtar’s early goal for Sreenidi Deccan FC, the Snow Leopards completed a sensational comeback in the final minute of the game thanks to substitute striker Ibrahim Nurudeen’s two goals.