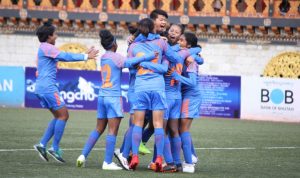 India kicked-off their SAFF U-15 Women’s Championship 2019 campaign with a 4-1 victory over Nepal at the Chalimithang Stadium in Thimphu, Bhutan, on Wednesday, October 9.

India got off the blocks early on as Sumati Kumari was played through behind the Nepal defence and slotted it past the near post. Both sides traded blows but the Indians gathered their composure soon enough and went on to double their lead when Sumati turned provider. She squared the ball to Lynda, who put it past the keeper – a few minutes prior to the half-time break.

The Indians came out with the same intensity in the second half, and Lynda found the back of the net again as she was set up by Sumati for a second time. Man Maya Damai pulled one back for Nepal after the hour mark but substitute Sai Sankhae put Priyanka through on goal as the latter added the fourth.

“First games are always difficult, but we passed the ball well and created a lot of chances. We still can play better,” said head coach Alex Ambrose after the match. He added: “These girls are still in the learning phase, so yes, this is the time to learn from their mistakes. They will keep getting better with every game.”

India are slated to play Bhutan in their second match of the SAFF U-15 Women’s Championship on Friday, October 11, which will kick off at 5.30pm IST and streamed live on mycujoo.tv.

Previous India U-15 Girls ready ahead of SAFF U-15 Women’s Championship!
Next ICC and FIFA confirmed for iSportconnect Dubai Summit!