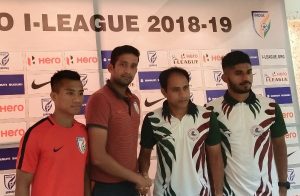 The Floyd Pinto coached Indian Arrows, resurgent after a win against Shillong Lajong FC in their previous game, take on the challenge to Mohun Bagan at Cuttack’s Barabati Stadium on Saturday, November 10. The 16th game of the 12th I-League will be the second game of the day and is scheduled for a 5pm kick-off.

The Indian Arrows, to their pleasant surprise, find themselves above Mohun Bagan in the league table going into the game with three points from two games to Mohun Bagan’s two from an equal number of games. They were overwhelmed 1-4 in the 12th I-League’s opener against table toppers Chennai City FC but in a display of professionalism, did extremely well to bounce back with a win in their next game.

Indian Arrows coach Floyd Pinto shared his thoughts on the eve of the game saying, “Getting the win in the first home match gives more confidence. But when we face Mohun Bagan tomorrow, we will need to be faster, quicker, and focused on all terms. The boys need to take decisions of their own, be it in defending or in the attacking line. These boys will adapt to the combinations as they play more matches and get used to it and then we can see more goals. It’s just a matter of time and patience.”

Mohun Bagan, on the other hand, have opened their campaign with two draws and will be smarting from the fact that they were in winning positions in both those games only to give it away. They will, however, also be enthused by the comeback of star Haitian winger Sony Norde, who played the last 30 minutes of the previous game and scored a brilliant goal as well.

Coach Shankarlal Chakraborty indicated that Sony was not ready to play the full 90 minutes yet, when he commented in a pre-game chat, “I am not totally dependent on Sony, but yes, after nine months, a player can’t be in a position to play 90 minutes. So I will see if he can play a little longer. I am focusing on all the players in my team.”

The 18-man squad which travelled to Cuttack on Thursday had two changes to the 18-man squad, with medio Shilton da Silva and left winger Abinash Ruidas coming in place of veteran Mehtab Hussain and P.M. Britto.

Coach Shankarlal Chakraborty signed off saying, “We drew the last match so we need to be extra careful this time. Indian Arrows are the youngest but an experienced team. The exposure trips that they got in recent years is remarkable and no one in Indian Football has ever got that. They have also won the last match. So we will have to work hard and be confident before facing them tomorrow. It will be a tough match indeed and let us hope for the best.”