Jamshedpur FC’s TP Rehenesh – On the road to redemption! 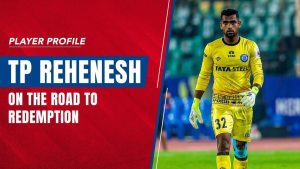 TP Rehenesh may only be 29 years of age, but the goalkeeper has already amassed enough experience to be considered one of the veterans of Indian football owing to his time at the highest level of the sport.

For over 10 years now, TP has been one of the most trusted custodians in the country, playing for his nation multiple times and competing in club tournaments that have won him many plaudits.

So when the keeper signed for Jamshedpur FC back in 2020, big things were expected, and he didn’t disappoint.

Jumping right into the first team, the man from Kozhikode was quick to cement his place in the side, becoming one of Owen Coyle’s trusted lieutenants at the back and playing a key role in the Men of Steel lifting the League Shield last season.

His pedigree as a goalkeeper was known for a very long time. The Kerala native played for multiple clubs such as ONGC, Mumbai Tigers and Shillong Lajong FC before sealing a Indian Super League move to NorthEast United FC once the newly formed tournament began.

After two loan stints at East Bengal Club, TP was back home in Kerala as he represented Kerala Blasters FC for a year before sealing a move to Jamshedpur FC.

His time in the national team at both youth and first team levels only made him a better player, but arguably his toughest spell is being seen now at Jamshedpur FC.

Not because of poor performances, but because of the emergence of young keeper Vishal Yadav. Vishal has taken his opportunity in the first team with both hands, and is currently keeping TP out of the starting eleven, but if there’s one thing the South Indian shot-stopper knows, it’s how to fight back.

TP has picked his levels up in training like never before, and is perhaps now at an even higher level than he was at earlier. They say healthy competition is best for a team, and head coach Aidy Boothroyd has made it very clear that he sees this as a great problem to have.

With TP Rehenesh sure to make a comeback to the starting setup once again, we can prepare to witness the best of the goalkeeper in the matches to come.