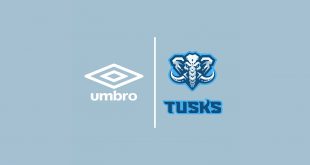 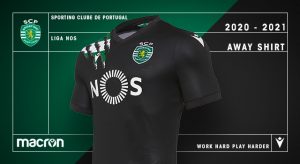 After the presentation of the Home shirt at the beginning of the month, Sporting Clube de Portugal and Macron have unveiled the new ‘away’ shirt that the Portuguese Leões will wear during the upcoming season.

The new away shirt is a knit jersey V neck in total black, a colour suggestive of the lion spirit that animates the club. The lion is the symbol and mascot of the portuguise team and a sublimated print of a scratch of the powerful animal appears on the right shoulder, in the front. Through the scratch we catch a glimpse of the club’s classic white and green horizontal stripes. Another detail inspired by the mascot is in the lower right side, where the lion appears again in the embossed club crest. The backneck is personalized with the colours of the club, the logo and three scratches in white and green left by the lion claws.