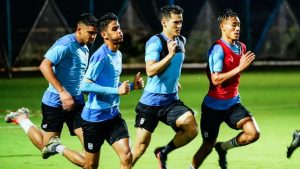 After a rollicking start to their debut campaign at the Durand Cup, Mumbai City FC will take on hosts and local favourites ATK Mohun Bagan in their second Group B match on Wednesday, August 24 at the Saltlake Stadium in Kolkata with the action kicking off at 6pm IST.

Lalinzuala Chhangte (89′,90′) bagged a brace while Vikram Partap Singh (45+3′) and Greg Stewart (65′ penalty) contributed a goal each in what was a comprehensive 4-1 win over Indian Navy FT in the Islander’s opening match of the competition.

Currently leading Group B, Des Buckingham’s side will look to consolidate their place at the top when they square off against ATK Mohun Bagan in a battle that has given some memorable moments over the last couple of seasons.

ATK Mohun Bagan, on the other hand, went down surprisingly 2-3 against a spirited Rajasthan United FC in their opening match and are currently placed fourth in the points table.

Mumbai City FC head coach Des Buckingham said, “I am very happy with the start we have got. We conceded first against Indian Navy, but we settled in quickly and played good football overall. But, it’s just the beginning, and we want to carry forward the momentum.”

The game will kick off at 6pm IST and will be broadcasted on Sports18 1 & Sports18 1 HD and can be streamed online on Voot and JioTV.