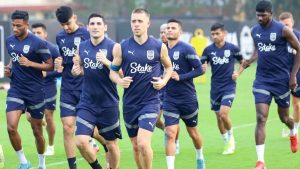 Mumbai City FC are all set to clash against Kerala Blasters FC in their upcoming fixture in the 2022/23 Indian Super League season. The Islanders will welcome the Blasters for a top of the table clash.

Mumbai City FC, in their previous ISL game extended their unbeaten run in the league with a comprehensive 4-2 win away from Odisha FC away from home. Mumbai City FC will take on Kerala Blasters FC at the Mumbai Football Arena on January 8 at 7.30pm IST.

The Islanders still remain unbeaten in the 2022/23 ISL season after the 12 games they have played in this ISL campaign so far. Mumbai City FC have won nine and drawn three in the league and are yet to taste defeat this season. After defeating East Bengal 3-0 away from home on their return from a 15-day hiatus, Mumbai City FC took Chennaiyin FC at home in which they emerged victorious after beating the Marina Machans 2-1. In their most recent game, they defeated Odisha FC in an entertaining away game that ended 4-2 in favour of the Islanders thanks to an inspired performance by Lallianzuala Chhangte.

Kerala Blasters FC currently sit third in the ISL table, nine points behind the Islanders going into this game. Ivan Vukomanovic’s side have won eight, lost one and drawn three games this season. After losing 0-2 to Mumbai City FC in the reverse fixture earlier this season Kerala Blasters FC have gone on an unbeaten run. They drew 1-1 away from home with Chennaiyin FC in December. After the draw against Chennaiyin FC, the Blasters had back-to-back home games against Odisha FC and Jamshedpur FC in which they emerged as victors after beating them 1-0 and 3-1 respectively.

Head coach Des Buckingham in the pre-match press conference before the home game against Kerala Blasters FC talked about how the team is preparing for the fixture, “I’ve spoken about making sure that we as a team just focus on our game and prepare ourselves as well as we can to face what will be a very tough and challenging Kerala side, we know that but also we’ve been playing some good football as well, so I’m expecting is a very good game between two teams trying to play exciting football and I hope it showcases that in the stadium for everybody to witness.”

He went on to talk about what the new arrivals of Halen Nongtdu and Ahan Prakash will bring to the squad, “Two very good young Indian players that we hope to help them continue to progress in their careers. We recruited them because we felt that both of them fitted into the way that we want to play not just this year, but looking further into the future. Both will be eligible to play if we want to put them on the pitch. I’m very excited about what both of them can bring to the squad and the club as a whole.”

Coach Buckingham was accompanied by Rahul Bheke who spoke about how he as a senior is helping these players integrate into the Islanders squad, “It is really important for me as a senior or as a captain, to keep motivating them. Keep guiding them in the right direction, so that’s what I will keep doing and helping them throughout the season so that they can embed in the squad easily.”

Bheke went on to talk about the support from the fans at the Mumbai Football Arena, as he said, “We need them in large numbers to support the team. We need them in the stands they’re like our 12th man, they give us the boost of energy on the field to perform well, and that’s why we need them. There will be Kerala fans too in the stands, so we need Mumbai fans to be there. It’s a weekend, so I’m looking forward to seeing them in large numbers and playing in front of them.”

Buckingham ended the press conference by talking about his vision of the club after his contract extension was announced earlier this week, he said, “I want to be the best coach that I can be and I’m supported hugely by the club and I’m supported hugely by the City Football Group. I aligned what I want to do with what the club wants to do. The club wants to be the best club it can be. It’s not about competing against others. It’s very much about looking from within and making sure we build our club up the way that we want and do everything we can to make sure we are the same as any other CFG club, which I’m confident to say coming from Melbourne, we’ve brought a lot of that in here already, but it’s now about trying to improve that and get better, which will help us provide better services to players to staff and the football community as a whole here in India. We’ll set this team up to try and be as successful as they can be, not just for one season, but for hopefully many more, both domestically and hopefully in Asia.”