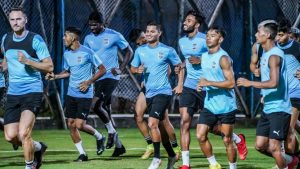 After qualifying from Group B of the Durand Cup 2022 with top spot, Mumbai City FC are set to take on fellow Indian Super League club Chennaiyin FC in the quarterfinal of the 2022 Durand Cup. The two former ISL Champions will go up against each other on September 11 at 6pm IST, with the action unfolding at the Saltlake Stadium in Kolkata in what will be a titanic encounter.

The Islanders were in near perfect form in the group stages, as they comprehensively won their games against Rajasthan United FC and The Indian Navy Team, 5-1 and 4-1 respectively. Des Buckingham’s side drew 1-1 against ATK Mohun Bagan and the only loss of the group stages came against East Bengal in a nail-biting affair that left the Islanders on the wrong end of a 3-4 scoreline.

Chennaiyin FC, on the other hand, had an almost identical run to that of Mumbai City FC in the group stages of the 131st Durand Cup. The Marina Machans won their group stage games against TRAU and NEROCA, 4-1 and 2-0, respectively, while their only loss came against defending ISL champions Hyderabad FC in a match they lost 1-3 along with a 2-2 stalemate against Army Red.

In the build up to the quarterfinal against Chennaiyin FC, Coach Des Buckingham in a press conference said, “So far in the Durand Cup 2022, we have tried to get better and build throughout the tournament.”

He went on to say, “We spoke about picking up from where we left off the (AFC) Champions League and both results and performance wise, I certainly felt in the first three games that we did that, so we put ourselves in a strong position to top the group. We were able to make sure we managed our group well and gave our players opportunities to play and made sure we arrived into the quarterfinal without suspensions and potential injuries, which I’m pleased to say we haven’t. So, it’s all about getting better.”

Adding on the game against Chennaiyin FC and The Islanders’ preparations, Des Buckingham said, “This is going to be a good game for us against a very strong ISL team. But we’re looking forward to it. It’s nice for us to have these competitive games while we’re still in pre-season whilst also trying to be as successful as you can in this tournament itself.”

He further added, “We flew out to watch Chennaiyin FC’s final group game (in Imphal), so we’ve obviously done a lot of work and watched them. We’re trying to get our head around and understand how they play and what they are doing. We’ve tried to do as much as we can to prepare ourselves. We know we are going to come up against a tough team who have been put together well. I think their recruitment has been excellent. But we’ve done our work as much as we can to try and highlight areas where we think they’re strong and the way we can nullify them. And we’ve also highlighted some areas where we can take some advantages as well.”

Des Buckingham concluded by talking about Mumbai City FC’s approach to games for the upcoming season and the on-going Durand Cup, “I’m excited as one should be as you go into tournament football. We don’t change our approach on how we want to do things, whether it’s in the league or the group stages of this competition or knockout football. We’ve got a way that we operate on and off the field. We believe our standards are very high and what we ask of the players and the staff here is very consistent.”

He signed-off the press conference by saying, “I’ve been in high performance sport long enough to know that if you can remain consistent to those high standards, more often than not you tend to do well. You hope that if you do well then, the results come with it.”

Des Buckingham has confirmed that Mourtada Fall and Rowllin Borges are both in contention to be involved in tomorrow’s Quarterfinal clash against Chennaiyin FC.

The game will kick off at 6pm IST on the 11th of September 2022 and will be broadcasted on Sports18 1 & Sports18 1 HD and can be streamed online on Voot and JioTV.