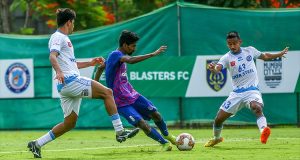 Naushad Moosa’s Bengaluru FC B side, in action at the Reliance Foundation Development League, refused to take their foot off the pedal in a come-from-behind 5-2 win against Jamshedpur FC at the Nagoa Ground in Goa on Saturday. Lenin Singh (4′) gave the visitors an early lead before goals from Rahul Raju (18′, 52′), Lastborn Mawphniang (45′), Bekey Oram (47′) and Jagdeep Singh (60′) gave Bengaluru FC a resounding win.

Earlier, Bengaluru FC rolled out the same eleven that logged a 3-0 win over Chennaiyin FC three days ago. Pegged back by Lenin’s goal in the early exchanges, the Blue Colts shrugged off the deficit with just over a quarter of an hour played when Rahul met Namgyal Bhutia’s cross into the box with an acrobatic effort that flew past Vishal in the Jamshedpur FC goal.

Eager to take the lead into the break, Bengaluru FC found the net once again in added time in the first half when Jagdeep’s ball into the box caught the Jamshedpur FC backline off guard. Lastborn capitalized on the defensive lapse and slotted home from close range to make it 2-1 as the referee drew curtains on the first period.

It took just two minutes for the Blue Colts to add to their tally at the restart, with Damaitphang Lyngdoh’s high press allowing Rahul the opportunity to find Bekey unmarked in the box. The midfielder drew the ‘keeper off his line and slotted home to make it 3-1.

Five minutes later, Bengaluru FC were gifted a fourth when a weak back-pass allowed Rahul to pounce for possession and dink over Vishal. On the hour mark, Amay Morajkar’s corner fell to Jagdeep, who nodded home to make it 6-1. Jamshedpur FC reduced the deficit when Nikhil Barla found himself at the end of a clearance from Robin Singh and slotted home, but it was too little too late for the visitors, as Bengaluru FC notched their sixth win of the campaign in as many games.

The Blue Colts face Kerala Blasters in their final clash of the Reliance Foundation Development League on May 12 at the Benaulim Ground.