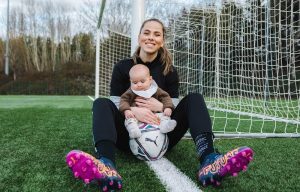 In May 2022, Icelandic midfielder Sara Bjork Gunnarsdottir became the first player to win a claim against a club through the FIFA Maternity Regulations.

The regulations, which were introduced in January 2021 after pressure from FIFPRO, entitled Bjork Gunnarsdottir – now at Juventus FC – to full payment throughout her pregnancy and until the start of her maternity leave when at former club Olympique Lyonnais.

Bjork Gunnarsdottir’s case showed that all players, even those at high-profile clubs, need protection. It also demonstrated how important it is to regulate minimums and not leave them to the goodwill of the parties.

FIFPRO provided legal support to Bjork Gunnarsdottir – from explaining her rights to representing her before the FIFA Dispute Resolution Chamber.

FIFPRO sat down with Bjork Gunnarsdottir and Senior Legal Counsel Alexandra Gomez Bruinewoud to reflect on a ground-breaking case, and what else needs to be done to protect the rights of players going forward.

Sara, how did this issue with your former club first start?

Sara Bjork Gunnarsdottir said, “When I first saw that a payment had been missed from Olympique Lyon, I assumed it was a mistake. I had been nervous to tell them I was pregnant initially, but they were reassuring. They also understood my desire to return to Iceland during the pregnancy, especially given the high rate of COVID-19 in the team at that point, and even spoke to the press about how they were going to support me.”

“Then a second payment was missed. When I asked what was happening, the replies were evasive, until finally I was informed that they were following French law on sick leave instead of FIFA’s maternity regulations, which would not entitle me to full payment during pregnancy and until the start of the maternity leave. FIFPRO quickly made me aware that this was something they had no right to do.”

How did FIFPRO support from a legal perspective?

Alexandra Gomez Bruinewoud said, “The FIFA provisions on maternity are a minimum and are mandatory, and Lyon – a club that has always championed the progress of the women’s game – should have known this. A labour case was raised before the FIFA Dispute Resolution Chamber which Sara won. There was a very clear blueprint for any club that thinks FIFA’s maternity laws don’t apply to them. They do. Players deserve the support and security that Sara was denied. Also, the decision is quite clear in the explanation of the duty of care that clubs, as employers, have towards players, as employees.”

What did it mean for you to win the case?

Sara Bjork Gunnarsdottir said, “I am proud of what I have achieved, not just for me, but for all women who are to follow; all the players who are about to become mothers, and who won’t have to worry about their careers because they can use the example that I have set to ensure fair treatment. My pregnancy was of course a time of happy anticipation for me and my partner, but I always had this worry about my career and next steps in the back of my head.”

“As well as winning the case, I am proud of being part of the conversation around motherhood in football. It’s not just Lyon that has to do better – but everyone. There should be more preparation; it shouldn’t come as a shock when a young woman becomes pregnant and wants to continue her career after the baby is born.”

Previous Macron named new technical partner of Bulgarian Football Union!
Next One Month On: 5 billion engaged with the 2022 FIFA World Cup in Qatar!