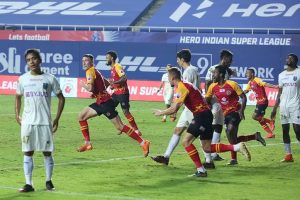 Australian defender Scott Neville’s late equaliser in the dying seconds enabled SC East Bengal to eke out a 1-1 draw in their second-leg ISL fixture against Kerala Blasters FC at the Tilak Maidan Stadium on Friday night.

Jordan Murray had earlier put Kerala Blasters ahead in the 64th minute.

The scoreline was the same when the two sides last met each other at the GMC Stadium, Bambolim on December 20. Interestingly, it was Kerala Blasters who salvaged an injury-time equaliser the last time around, courtesy a Jeakson Singh goal.

The two sides went into the contest having experienced a similar a first phase, including a late resurgence.

The first-half was evenly-contested as both teams created some chances, but lacked the necessary finishing in the final third.

Kerala Blasters’s top scorer this season, Murray tested SC East Bengal custodian Debjit Majumder as early as in the 6th minute with a powerful shot on target after receiving a diagonal ball, but Majumder parried it away to safety.

Five minutes later, Kerala Blasters goalkeeper Albino Gomes was at the receiving end as Harmanpreet Singh’s shot on target from close range forced the former into a fine save.

The Red-and-Golds dominated possession throughout, but Kerala Blasters looked to play pressing football with their speedy players like Sahal Abdul Samad, Murray, and Facundo Pereyra building up threatening moves on the counter.

After the first-half ended goalless, both sides registered shots on target early on in the second period, in a bid to break the deadlock.

In the 47th minute, Bright Enobakhare struck a low cross towards the opposition goalmouth from the left. However, Kerala Blasters skipper Jessel Carneiro’s goal-line clearance, after an initial fumble, kept the ball out of play.

A couple of minutes later, Murray’s shot on target was once again put away by Majumder.

The deadlock was broken in the 64th minute when Murray latched on to a long ball from Gomes and slotted it past Majumder to register his sixth goal of the season.

SC East Bengal Head Coach Robbie Fowler exhausted his five available substitutions in this half as he looked to introduce fresh legs. Their search for an equaliser was given impetus with Anthony Pilkington, Md Rafique, Surchandra Singh, and Aaron Amadi-Holloway coming on for Matti Steinmann, Harmanpreet Singh, Ankit Mukherjee and Danny Fox. Earlier, immediately after the break, Milan Singh made way for SC East Bengal’s new signing, Ajay Chhetri.

A glorious chance to get on level terms came SC East Bengal’s way in the 88th minute when Chhetri’s free-kick into the opposition 18-yard area fell in the path of Amadi-Holloway, but the latter was unable to get the final touch on the ball.

Just when it seemed that the hosts would end the contest empty-handed, a moment of inspiration in the final few seconds of the five-minute stoppage time rescued a point for them. Enobakhare’s corner saw Neville leap at the far post and nod it in to register his maiden ISL goal and ensure a 1-1 draw for his side.

The Red-and-Golds remain rooted in the ninth position with eleven points in as many fixtures (two wins, five draws, and four losses), besides extending their unbeaten streak to six matches.

Speaking about the result at the virtual post-match Press conference, Fowler said, “We go into the games, believing that we can get the right result. They (Kerala Blasters) made it incredibly difficult for us by putting lots of men behind the ball and playing a shape that makes it easy for them to defend. So, it was tough. We got there in the end and that’s the main and most important thing.”

SC East Bengal play their next game against Chennaiyin FC, at the GMC Stadium, Bambolim on January 18.