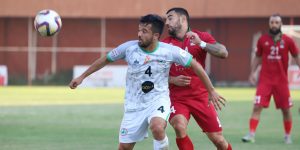 Ten-man NEROCA FC held fort for more than a quarter of an hour to earn a goalless draw against Churchill Brothers at Tilak Maidan on Thursday, January 12.

Playing away from home, losing Uzbek midfielder Mirjalol Kasimov in the 73rd minute due to a second yellow card, NEROCA coach Wangkhem Khogen Singh was quite happy with the result but he would know that his team could even have won this game. On the other hand, Churchill Brothers coach Fernando Varela cannot be blamed if he is frustrated as his side could have won it, too, with a comfortable margin.

Referee Lalit Singh Rawat blew the final whistle in the fifth minute of stoppage time as Churchill Brothers’ Lalawmpuia Sailo’s left-footer went wide of the post. That was symbolic of how the day progressed.

The string of missed chances for both sides began in the fourth minute of the match with NEROCA. Former Churchill Brothers forward Kamo Bayi, getting the start over Jourdain Fletcher, got a loose ball outside Churchill Brothers’ penalty box and had only goalkeeper Albino Gomes to beat but ended up with a weak right-footer straight into his hands.

It was Churchill Brothers’ turn to miss three minutes later. Their Spanish forward Tana took a poor corner but retrieved the ball and crossed to captain Momo Cisse in the middle, who tried to take a shot twice but could not get it away.

Winger Yumnam Gopi Singh, NEROCA’s scorer in the last match, was creating a lot of chances from the left but none of his teammates were up to the task. In fact, Lunminlen Haokip got two chances in quick succession. He could not trap the ball properly on the first occasion when Sweden Fernandes centred from the right, and a final tackle at the last moment denied him the second time around.

NEROCA’s midfield engine Kasimov had a day to forget. He could not make much of an impact and earned two yellow cards in each half to be sent off. Even Gopi was guilty of putting an unmarked header way over the bar in the 26th minute of the match.

Churchill Brothers’ Kapil Hoble could have also scored in the 37th minute off a nice through pass from Joseph Clemente but missed narrowly. The easiest chance of the half, however, came to the home team’s Afghan recruit Sharif Mukhammad a few minutes later. Kapil’s beautiful centre from right of the box fell to Mukhammad’s right foot but he overhit it.

Abdoulaye Sane, Churchill Brothers’ most prolific scorer so far, had a poor outing and was replaced right after the breather but that did not help.

NEROCA continued to get and squander opportunities, with Kamo and Sweden being in a position to score in the 53rd minute due to Gopi’s perfect centre but none of them could. Six minutes later, Gopi himself tried a long ranger with his right foot, which NEROCA custodian Shubham Dhas tipped over the bar.

Then Cisse and Tana hit the horizontal and the upright within seven minutes of each other. Being a man down seemed to weigh heavily on NEROCA when Hero of the Match Anil Gaonkar found empty space on the left and got a pass from Tana, but he could not keep his shot on target.

While Shubham had a tough time during this period and came out in flying colours, NEROCA deserve credit for not parking the bus and trying to score. Young midfielder Tangva Ragui even came close to pulling off a stunning victory in the second minute of stoppage time. Getting the ball just outside the Churchill Brothers box, he saw Albino off the line and floated one over his head. It did dip but missed the target by a whisker.

With this draw, NEROCA stayed in the relegation zone with eight points from 11 matches, while Churchill Brothers remained seventh with 13.