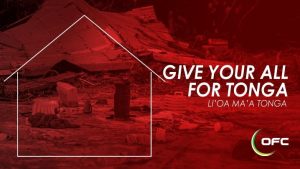 The governing body of European football, UEFA, has thrown its support behind the Oceania Football Confederation’s fundraising campaign for Tonga, Li’oa Ma’a Tonga – Give your all for Tonga.

UEFA confirmed its support for the campaign on Tuesday.

“We will make a financial contribution and strongly encourage other members of the European football community to do the same,” UEFA President Aleksander Čeferin said.

UEFA’s web and social media channels will also invite football fans across Europe to back the appeal.

“I would like to commend the OFC for their act of solidarity with Tonga,” Čeferin added.

“By standing with Tonga in its hour of need, the OFC appeal shows how football can use its reach and influence to help society.”

To support the rebuilding of Tonga, visit www.givealittle.co.nz/cause/lioa-maa-tonga-give-your-all-for-tonga to make your donation.