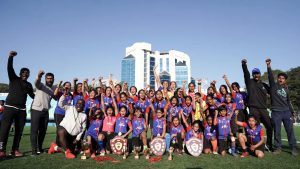 The sixth edition of the BFC KSFA Soccer Shield culminated successfully at the Bangalore Football Stadium on Thursday, January 12. The three-day school tournament featured more than 800 kids who represented 28 schools from different parts of Karnataka. The teams were grouped in seven age groups across both the boys (U-9, U-11, U-13) and girls categories (U-9, U-11, U-13, U-15).

Greenwood High International School dominated the girls’ categories reaching the finals in all four age groups. They won the title in three out of the four age group categories (U-9, U-11, U-13), while Inventure Academy were triumphant in the U-15 girls category.

In the boys category, St. Xavier’s High School (Belgaum), Inventure Academy, and DPS North came out winners in the U-9, U-11 and U-13 boys categories respectively.

Watch about the partners of Bengaluru FC KSFA Soccer Shield!
!