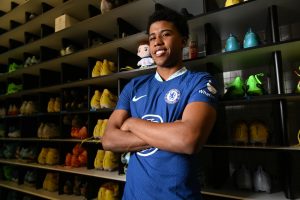 The 18-year-old has progressed through the ranks at Vasco, his boyhood club, and helped them to promotion to the top flight with a third-place finish in Serie B last term, during which he played 33 times and scored eight goals.

On signing for Chelsea FC, Santos said, “It’s a very big opportunity for me. This is a big club playing in big competitions like the Premier League so I am very excited. The players here are so good and I am very happy to be here.”

Santos made his debut at just 17, as a late substitute in the Campeonato Carioca, a tournament for teams in the local area of Rio de Janeiro. He played most of that campaign for the club’s Under-20 side and impressed in a box-to-box midfield role in which he regularly contributed with goals and assists.

His league debut came on the final day of the 2021 season before he became a more prominent figure in the 2022 campaign just finished, earning himself a regular spot in the midfield trio.

Born in Rio, he has represented Brazil up to Under-20 level and now makes the move to London.