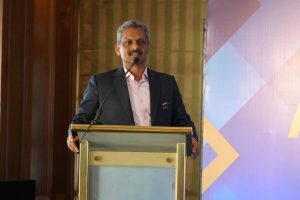 The 76th National Football Championship for the Santosh Trophy has gotten underway, and it aims to spread the game to all corners of the country. Much like how it started in the pre-independence era, this season the state teams will get to play more number of matches against teams from all across the nation.

“India is a very big country. It’s almost like a continent in itself, and we need to enlarge the competitive base of football at every level here. Every state looks forward to participate in the Santosh Trophy, and giving them better opportunities means that they will be motivated to improve the grassroots operations in their regions, in order to do well in the competition in the longer run,” said AIFF Secretary General Dr Shaji Prabhakaran.

“The best players in the country may be playing in the ISL or the I-League, but the players in the Santosh Trophy are looking to launch their careers. Many use the tournament as a stepping stone, and a few good performances could mean contracts with bigger clubs. This tournament also helps many players secure government jobs. This is essential for players especially at the lower level, as they can keep playing football with a secured income in their coffers,” he said.

The Secretary General stressed on the importance of giving more games to the states and its players, which will, in turn, increase the competitiveness of the teams.

“Our attempt is to revive the Santosh Trophy, to take it back to being one of the most important competitions in the Indian Football landscape, and to energise football at every level. With more games, the states will also be preparing their teams with more seriousness and they will try to find more local talents,” said Dr Prabhakaran.

“I think taking the Santosh Trophy abroad to a country like Saudi Arabia will greatly inspire the players and the teams. Although only four teams will travel, 36 sides will fight for these four spots, and we expect the competition to be fierce for these four spots,” he said. “The overall competitive value of the tournament will increase because of it.”

In the end, the overall aim of the AIFF management remains to circulate more money into local football, and the Santosh Trophy could play a major role in achieving that.

“The Santosh Trophy has been one of the flagship tournaments over the years. Maybe the limelight has gone away from it somewhat in the last decade, but we want to put it back on that pedestal,” he said. “We want to recreate the same aura of old that the Santosh Trophy once had and give space to the competition to grow further.“

Hopefully, with the success of the Santosh Trophy, our stakeholders will be more motivated to put money into local football, because we need more investment at the grassroots levels. Our Member Associations need a lot of assistance and guidance in developing football at the local level, so maybe the Santosh Trophy could act as a bridge for greater collaboration,” he said.