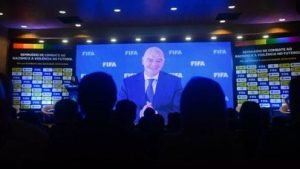 Gianni Infantino has told a seminar in Brazil that football must stand united against racism, discrimination and violence, and warned that no continent is immune from these scourges. The FIFA President also detailed measures that will be taken by FIFA to protect players from hate speech posted on social media.

In a video address to the Seminar on the Fight Against Racism and Violence against Football, organised by the Brazilian Football Confederation (CBF), the FIFA President said he was also shocked at the way in which supporters can turn against players from their own teams.

“Football has a duty to protect the players who bring so much joy and happiness to all of us by their exploits on the field of play,” he said during the opening of the event, held at the CBF headquarters in Rio de Janeiro.

“FIFA will not shy away from this battle but remember that we are living together, and we need the help and co-operation of our (FIFA) member associations and the continental confederations. FIFA remains determined to work together with you to eradicate racism, discrimination, and violence of any kind, wherever it still exists.”

Rodrigues said he had himself suffered discrimination during his career. “But such attitudes have never stopped me, and now, more than ever, they give me energy to overcome the hurdles in the struggle for a fairer, more humane and more fraternal society,” he said.

The FIFA President warned that racism was a global threat to football. “I know that, for a long time, many believed that South American football was relatively free from racism, and it was seen as more of a European problem. However, no continent can lower the guard against this threat,” he said. But he was encouraged that the CBF had recognised the problem, was organising the seminar and had invited speakers from Europe to help share the experience of other regions.

He added FIFA was aware of the damaging effect that social media posts could have on players. “This issue is not limited to racism, but also to homophobia, and other forms of discrimination,” he said.

Gianni Infantino explained that FIFA would combat this at upcoming FIFA tournaments by implementing a dedicated moderation service that will intercept such comments to prevent them from being seen by the recipient and their followers.

“FIFA wants our actions to speak louder than our words and that is why we are acting decisively to tackle the problem directly,” he said.

“No discrimination, in any form, should be allowed to blight our beloved sport – and there is no margin for error on this point.”

The event also heard about FIFA’s Good Practice Guide on Diversity and Anti-Discrimination and how FIFA works with trained observers to identify cases of discrimination at matches. Some concrete examples of good practices were provided, including some from Brazil, and it was stressed that getting fans involved in anti-discrimination was fundamental.

Previous Sorare launches its AS Monaco cards for 2022/23 season!
Next SportsKhabri VIDEO: A conversation with Arunava Chaudhuri on AIFF Ban by FIFA!