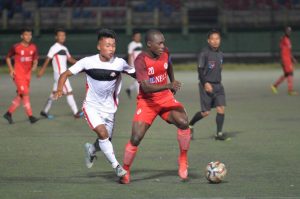 Defending champions Aizawl FC were the only side to conjure up a victory ion round 12 of the Mizoram Premier League – Season 8 played out during the weekend.

The league leaders dominated newly promoted FC Venghnuai in a 5-1 victory at the AR Lammual on Saturday evening to lay claims to retain their crown.

Lalhriatrenga broke the deadlock on the 20th minute which was followed up seven minutes later by a penalty from Rochharzela. F. Lalremsanga added a third right before halftime as Aizawl FC found themselves in a commanding position in the first half.

Isak Vanlalruatfela continued the spree on the 59th minute while FC Venghnuai were able to pull one back a minute later but were ultimately out-played by their opponents who added a late own goal seven minutes from time.

Ramhlun North FC and Electric Veng FC could not turn their recent form around earlier on Saturday as they battled to a goalless draw at Lammual.

Electric Veng FC enjoyed the better chances in an even match up as David Lalchhuanawma failed to find the net after being put through while Ramhlunchhunga was guilty of missing a couple of half chances.

Lalpekhlua Jongte was the main threat for Ramhlun North FC with him dragging a shot narrowly wide in the second half.

Chawnpui FC were able to hold Chanmari FC to a draw on Friday at the Rajiv Gandhi Stadium as they played out a 0-0 draw.

Chanmari FC were guilty of missing chances throughout the game with Chawnpui FC goalkeeper Vannunmawia saving a penalty from MS Dawngliana in the first half.

Chanmari FC now find themselves in fifth place, level on points with two matches to go and they will face Aizawl FC and Ramhlun North FC in their final two matches.

Previous Anas Edathodika comeback a boast for India ahead of Oman tie!
Next Odisha FC inaugurates its grassroots program with ‘kick-off meeting’ in Bhubaneswar!

As XtraTime reports, the Kolkata-based Ariyax Football Academy is currently undergoing a training camp in …