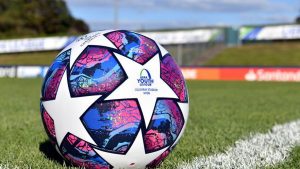 Exciting career moments are lined up for German referee Harm Osmers in the coming period – starting with his assignment for Monday’s UEFA Youth League final.

The 37-year-old, who gained his FIFA international badge in 2020, is relishing the opportunity to take charge of the big match between RB Salzburg and Benfica SL at Nyon’s Colovray stadium, in the latest stage of a referee pathway that began as a teenager, and which has progressed in impressive fashion through the German ranks before now opening out to include enriching new experiences in European competitions.

Osmers will follow up his Youth League appointment with another significant milestone to add to his CV this summer, when he is part of the video assistant referee (VAR) team at the eagerly awaited UEFA Women’s EURO final tournament in England. Refereeing life is looking upwards for the father of two young boys, who is based in Hannover.

“I had a huge smile right across my face when UEFA told me that I’d been chosen for the UEFA Youth League final,” Osmers says. “I’m looking forward very much to this match.” His date in Nyon on Monday is fitting reward for the hard work and dedication that began at lower-league levels before he became a German Football Association (DFB) referee in 2009 and achieved promotion to Germany’s top-flight Bundesliga in 2016.

Osmers, a trained financial controller, began refereeing at youth level at the age of 15. “Sometimes we had matches where there was no referee – parents or coaches would take charge of games,” he recalls. “I decided that I would like to try refereeing, no one forced me to become one! Gradually I became increasingly curious and wanted to learn more – so I stopped playing football at 18, focussed on refereeing, and a process started. I eventually wanted to see what I could achieve as a referee.”

“I’ve never had one special role model,” Osmers explains. “I’ve always been eager and open to watch other referees, to see how they handle situations, how they take decisions and manage players, and I’ve continued until today to collect various things and adapt them to my refereeing.”

Osmers’ journey through the German football system was gradual and positive. “It’s clear that you don’t learn everything at once,” he explains. “You learn to take charge of matches with 50 spectators, then 100, then 1,000. Then, when you reach a higher level, you learn a new environment where there is greater public and media exposure and bigger demands. It’s a step-by-step process of gaining experience along the way.”

“I’ve met a lot of good people and collected some very positive experiences along this long road,” he reflects. “I don’t consider any of the work I’ve done as a referee to be a sacrifice – I love football, and refereeing is my passion – it’s a privilege to do what I’m doing.”

Osmers feels that successful referees must have two main characteristics: “You have to be a good decision-maker, and you have to learn to manage people, especially in conflict situations,” he says.

“You can also put your skills in handling people into use in life away from refereeing – it’s definitely true that being a referee also gives you important life experiences.”

An all-German team will handle Monday’s final in Nyon – Osmers will be accompanied by assistants Robert Kempter and Eduard Beitinger, and fourth official Daniel Schlager. The team’s united spirit will shine through on the day. “I can’t referee a match only by myself, and I’m grateful to have a good team around me that I can trust,” Osmers says. “I must emphasise that it’s not about individuals – we will look to achieve a good performance as a team, and I see myself more as a team leader.”

The referee team will also play a crucial role on the field in acting both as ambassadors for football’s image and as ‘educators’, guiding and leading budding young talents eagerly striving to win a major European title at this early stage of their careers. “Referees stand for certain values – for example, fair play and respect,” Osmers explains. “We also want to contribute to this match by helping to apply these values.”

In addition to 100% focus and concentration, Osmers is determined to enjoy Monday’s occasion. “I’ll try and savour the moments before the match, because it’s extremely important to have a positive mind-set when you go into a game,” he says.

The appointment as a video assistant referee for the Women’s EURO is a particularly proud achievement, with the tournament in England in July set to attract record crowds and create impressive new benchmarks for the women’s game. “It will be a pleasure to go to England and be part of the tournament – this will be a great event,” says Osmers, who welcomes the introduction of VAR in top football as “a huge benefit for referees” in enhancing the overall decision-making process.

And what of the future? Harm Osmers prefers to concentrate on the present. “My first focus is on the Youth League final, and then comes the Women’s EURO,” he emphasises. “These are great achievements for me. I love refereeing – and I promise anyone who wants to be a referee that they will be taking a good decision…”

Ajax Amsterdam has signed a multi-year agreement with Unibet, a provider of online sports betting. …